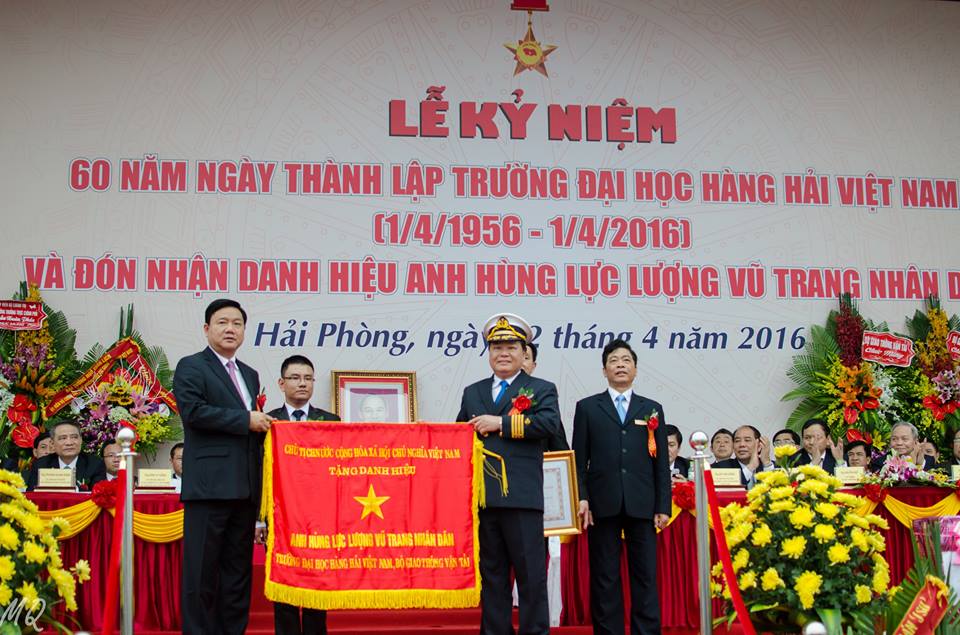 Vietnam Maritime University (VMU) on April 2 held a ceremony to receive the title ‘Hero of the People’s Armed Force’ and to celebrate the 60th anniversary of the establishment of the University.
The ceremony was attended by Politburo member; Minister of Transport and Secretary of the Ho Chi Minh City Party Committee Dinh La Thang.
Over the past 60 years, the VMU has accompanied the transport sector and the nation in the cause of liberation of the South for national reunification as well as socialist construction. The university has made significant progress and become a leading centreintraining, scientific research and technology transfer in Vietnam.

At the speech of this formal ceremony, Politburo member Dinh La Thang warmly congratulated Vietnam Maritime University on being received the title of Hero of People's Armed Force. VMU had to actively and couragely take responsibility for training the high- qualified labor force  for Vietnam maritime. In pursuing the ultimate purposes to become one of 17 national  major  universities in Vietnam in 2020, also to be equally qualified as other Asian maritime universities in 2025 and to get the standards of Asia - Pacific in 2030, Mr. Thang desperately wished that the University would positively take part in generating the labor force in general as well as the maritime labor force  in particular. That labor force had to attain high qualification, good working skills, discipline and have international knowledge, which required the university to innovate the training and teaching and mothods. However, we should not rest on those achievements but rather keep on sustaining good attemp constantly, untiredly and unsatisfiedly. In the coming time, to demonstrate the leading role in training section, the University should have specific initiatives to contribute innovating national education, actively creating a high quality labor market with great intellectual levels, which is the University’s outstanding strength. From now on, the University should operate well the Central Resolution 8 - 11th on "Renewing the basic of education" with the specific effective solutions and directions, particularly focus on the goal of forming and developing independent active initiative and creative learning for students. The VMU need to accelerate and complete the process of management towards self international integration. The university keeps on  innovating, improving the quality of programs, lectures, learning materials, and linking the educational  contents with the demand of enterprises and recruiters; accelerate the standardization of management staffs and lecturers; actively take good advantages of all investment resources for teaching and learning facilities; expand the links and exchange training experiences with international students. Mr. Thang  believes that after this event, Vietnam Maritime University will soon build up its regional and international reputation for  human resources training and  marine scientific researching.

The  great success of the ceremony once again affirms the great concern of the Communist Party and State, the leadership of the central ministries, local authorities, the support from other institutions and foreign universities about the development of the University. In the past sixty years, more than half a century up to now, having surpassed many debut difficulties, the university has changed so much and now become a major University in Viet Nam and in Asia. Hopefully in the near future, with the correct steps, the university will develop constantly, confirming its brand and reputation in the world.